The MSI RTX 3090 Suprim X is a giant graphics card with impressive PC gaming capabilities, and its performance will appeal to enthusiasts from all walks of life. It’s not the leader of the GPU food chain, as the Nvidia GeForce RTX 3090 Ti currently sits atop the teraflop totem. Nonetheless, this custom version of the Green Team’s premium card packs packs serious power into a package that can handle the heat.

Unfortunately, MSI’s high-end Nvidia GPU has a particular price issue. For some reason, you can actually grab the best graphics card – the RTX 3090 Ti Suprim X – for less, which calls the GPU’s relevance into question.

The graphics card scene is in a bit of a mess right now, and you could say the MSI RTX 3090 Suprim X is a victim of circumstance. Prices are just getting back to normal after a long shortage, but that doesn’t reflect the same drop you’d usually see around the corner since the next-gen RTX 4000 launched. It’s also up against rivals from Asus, EVGA, Gigabyte, Zotac, and, as mentioned, itself.

Price issues aside, the MSI RTX 3090 Suprim X is still a heavy hitter gobbling up the best PC games for breakfast. This graphics card wants to be served with a charcuterie board of ray tracing, ultra settings, and 4K resolutions, and you won’t even have to manually crank up fps to let that Kaiju GPU feast.

Just like other factory overclocked graphics cards, the MSI RTX 3090 Suprim X comes with a higher boost clock cap. It still has a base clock of 1,395 MHz, but hits 1,860 MHz when the boost kicks in.

Naturally, this means the RTX 3090 Suprim X is faster than Nvidia’s reference card, which kicks in at 1,695MHz. It can technically trade blows with the RTX 3090 Ti in terms of boost clock, though it’s still not fierce enough to take on its Suprim X sibling.

Equipped with 24GB of GDDR6X VRAM, even the most demanding games will struggle to gobble up its available memory. However, it certainly helps when it comes to higher resolutions and ray tracing, and having more than enough should help sustain the card for a few years. 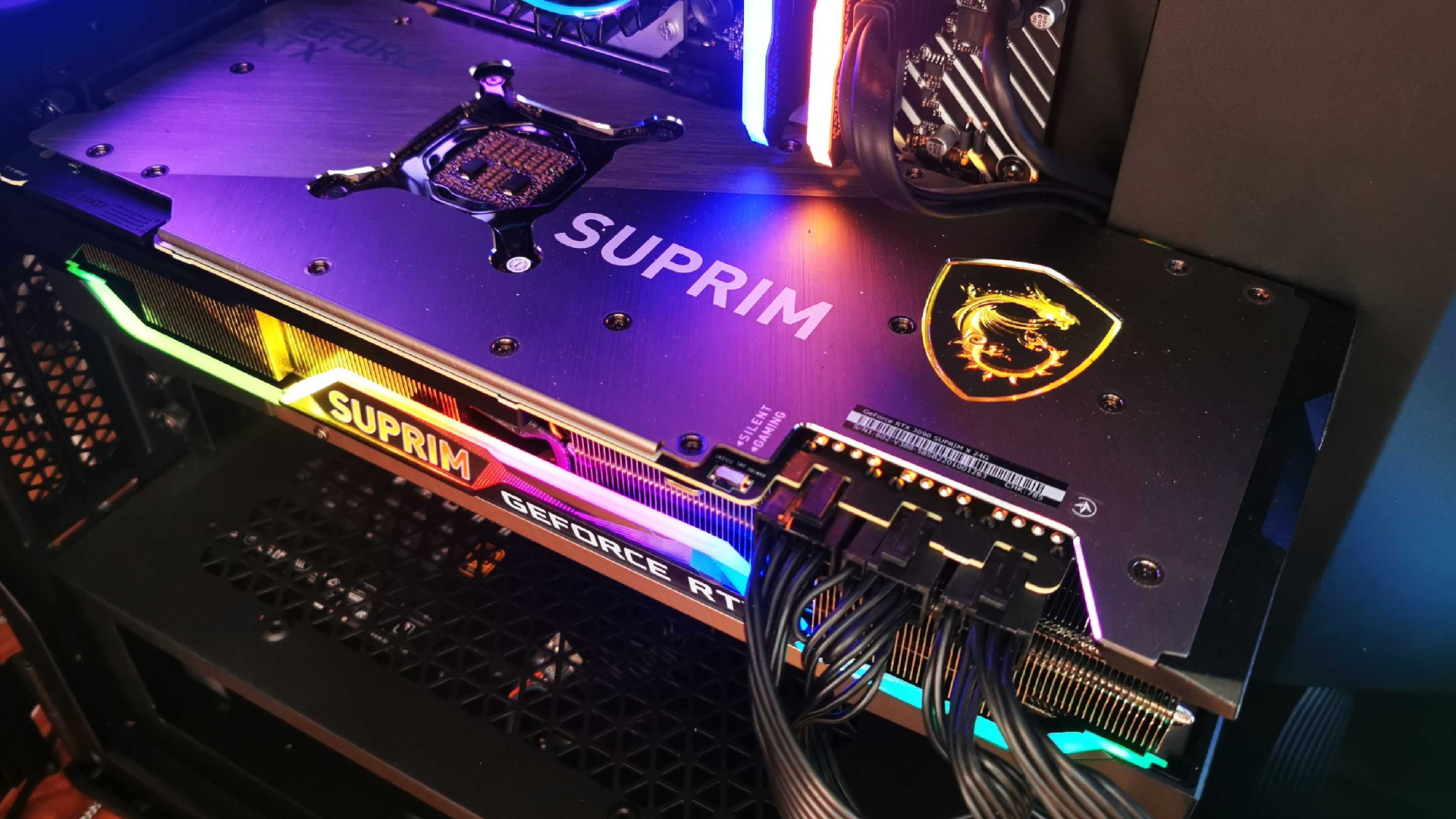 I’ve made several gags about the size of the MSI RTX 3090 Suprim X before, but it’s definitely the biggest GPU I’ve ever used. Featuring a chonky brushed metal shroud and Tri Frozr S2 cooling fan system, this card doesn’t remotely care about taking up space on the gaming PC. In other words, the Inside my spacious Corsair iCUE 5000T PC case feels cramped, almost like an inverted Tardis effect.

That’s not to say I don’t like the RTX 3090 Surprim X’s large and responsible stature, as its large body is packed with icy features. MSI clearly takes the cooling of its behemoth GeForce seriously, as its package includes a triple threat of Torx 4.0 fans, a dedicated array of memory module heat pipes, a solid nickel-plated copper GPU baseplate, and additional base pipes.

Make no mistake, the RTX 3090 is a ridiculously hot SKU, and all that extra Suprim X heft plays a huge part in overclocked performance. It’s for this reason that the Suprim X setup doesn’t feel over-engineered when paired with the GPU, as idle temperatures can reach 38°C. Under load, the board rarely ventures above 70°C, and the fact that its back plate feels like a hot plate to the touch is a testament to its heat transfer capabilities.

The RTX 3090 Suprim X is no bargain, as it has an impressive RGB light party on the front. I’m not completely convinced that every part of the PC should be clad in LEDs, but the colored stripe and illuminated MSI logo looks the part, and the light show it provides once it leaves my case I will miss.

Rather than using a single 12-pin cable, you’ll need to plug the RTX 3090 Suprim X into your power supply using three 8-pin connectors. That means you’ll have to go out of your way to manage the cables, and using the cheaper cords included with your PSU could spoil the beauty of the GPU. 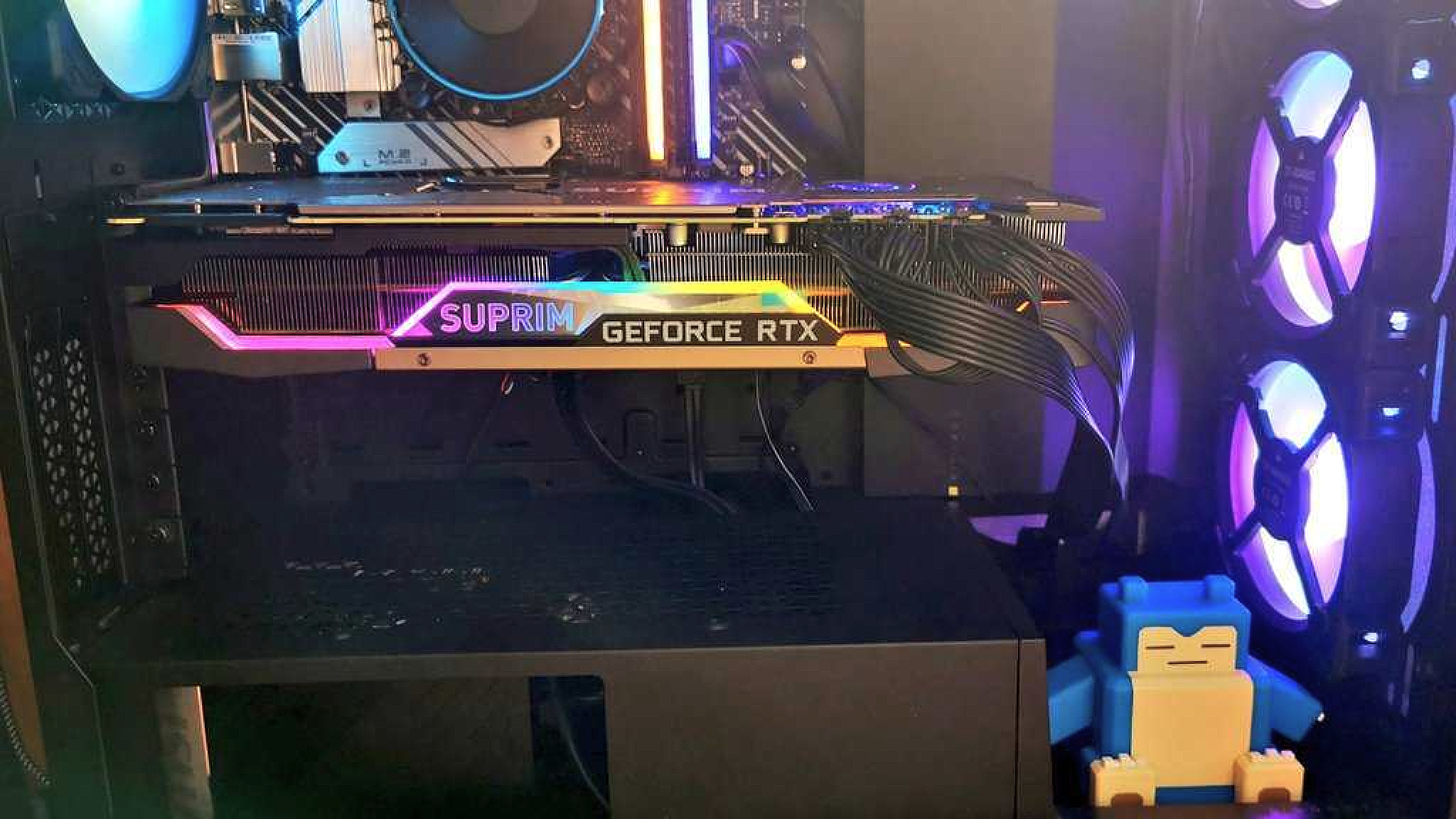 Every powerful GPU has a performance ceiling, but it takes a lot to stress the Suprim X. This RTX 3090 variant blasts its way through the most taxing PC gaming experiences – even notoriously stubborn builds like Cyberpunk 2077. done, the card does a quick job of CD Projekt Red RPG with the ultra-ray tracing presets enabled, but you’ll still need to rely on upscaling tools like Nvidia DLSS to maintain that 4K sweet spot 60fps.

Cyberpunk 2077 is a little annoying, because it’s still not the optimized experience it should be on PC. Perhaps that’s why the RTX 3090 Ti exists in the first place, as a Suprim X with the beefier Ampere GPU could pump in a few extra frames and save enthusiasts from tinkering with settings.

Of course, if you’re that fps fusspot you’re probably expecting an RTX 4090 anyway, but I’d still class the RTX 3090 Suprim X as a current-gen spectacle, especially when it comes to 4K. Sure, you’ll see a metaphorical sweat bead as he discusses ray tracing and ultra settings, but running Hitman 3 with absolutely everything on full throttle is a lot like watching Tobey Macguire hold up a train in Spider-Man. 2 – it might be struggling, but it’s still pretty darn impressive.

Here and now performance is good and good, but future heavyweight releases could put the RTX 3090 Suprim to the test, especially if newer mid-range cards pack a similar punch. While unfortunately I can’t step back in time and see how it handles Starfield or Elder Scrolls VI, playing the Metal: Hellsinger demo gave me some confidence regarding future performance.

For context, I previously had to revert to 1440p to play Metal: Hellsinger with higher settings enabled on an MSI RTX 3070 Ventus 2x. Comparatively, the RTX 3090 Suprim X turns the best gaming monitor into a 4K portal to hell, with frame rates reaching around 80fps. I’m not saying I’m surprised that an enthusiast card can outperform mid-tier contenders, but this comparison suggests it’s worth making the leap from the current-gen for the right price. 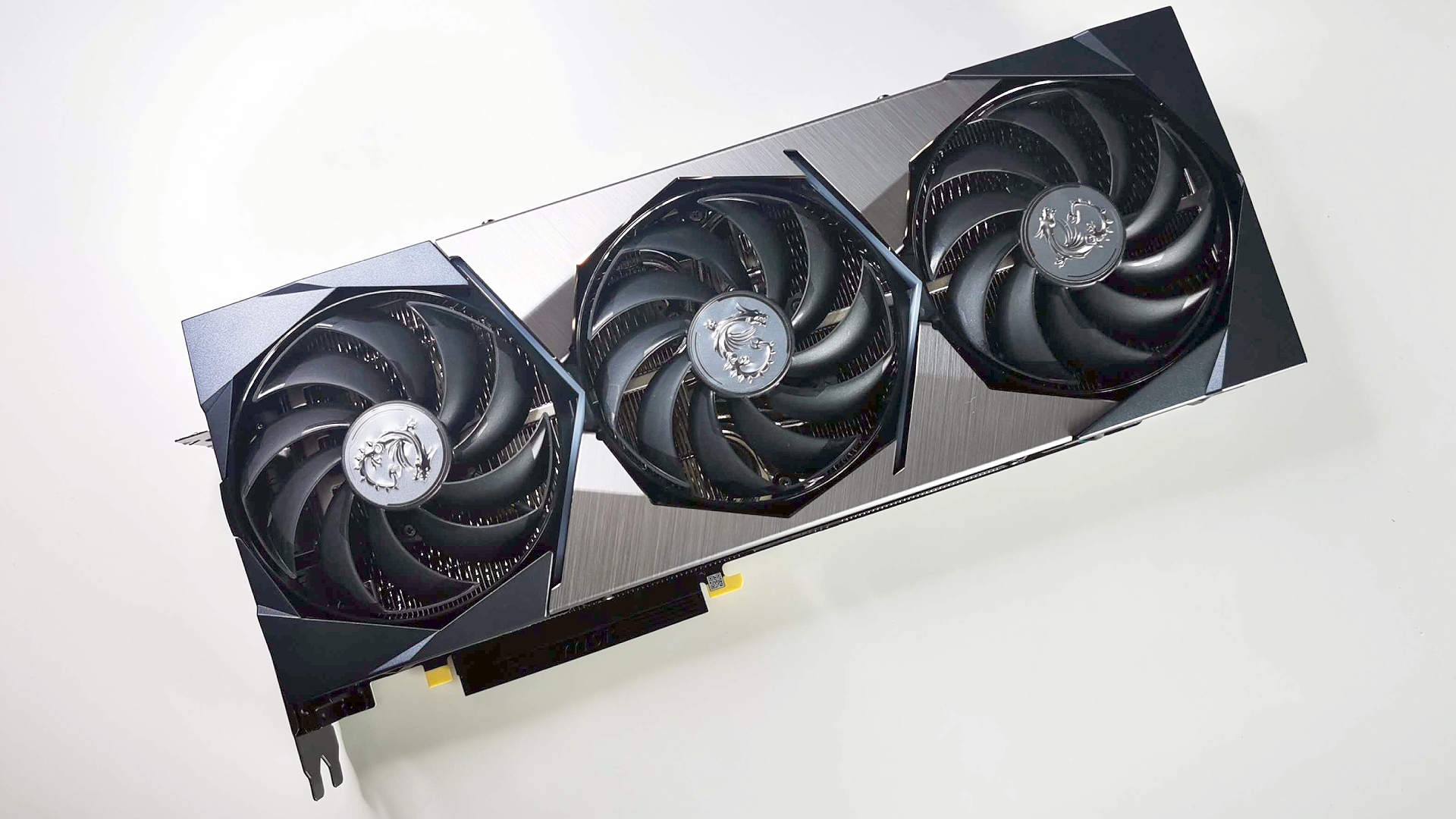 Singing the praises of the MSI RTX 3090 Suprim X GPU would be easy if it weren’t for the screaming price issue at the back of the chorus. Looks like this particular model didn’t quite get the GPU price drop memo, as it’s still going for $1,690 on sites like Amazon. Stranger still, the RTX 3090 Ti version of the same card is currently available for $1,199.99 USD. What is that? Do you now have a migraine? Me too.

All things considered, the MSI RTX 3090 Suprim X is a monstrous graphics card that shows what Nvidia Ampere technology can achieve. Next-gen Lovelace precursors might be on the verge of ripping it off its current-gen status, but custom cards like the Suprim X could, in theory, persist as a cheaper RTX 4000 alternative.

Unfortunately, now is probably not the right time to invest your gaming PC pennies in an RTX 3090 Suprim X. Whether there will be a good time to pick up the mighty GPU remains to be seen, but it all depends on persistence. stock levels. . If you’re totally unwilling to wait for the RTX 4090 to arrive, I suggest you check out the MSI RTX 3090 Ti Suprim X, as the package costs less, includes a more powerful GPU, and everything that goes to support the model RTX 3090. outside.

The Suprim X is an impressive GPU that showcases Nvidia Ampere’s capabilities, but its current price means it’s not a sensible gaming PC upgrade.